Janice (Jannie) Rovick was born on Saturday, December 6, 1941. Moments after she entered the world, doctors told Jannie’s mother, Emma, that her baby was special: Jannie had spina bifida and wasn’t expected to live past age eight. That day, Emma—a woman of strong values and faith—named her daughter Janice, meaning “precious gift.” Today Jannie, one of the oldest people living with spina bifida, is 78. 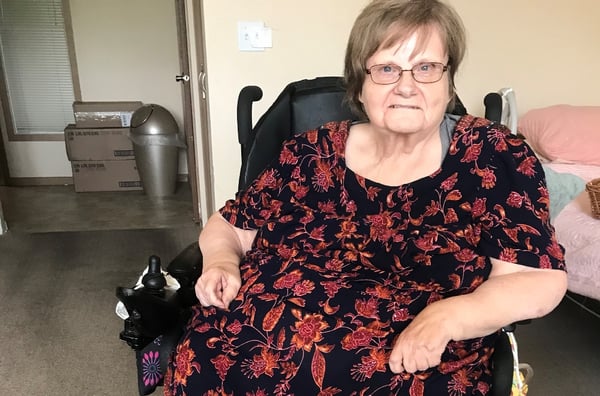 Throughout her life, Jannie has done things most people thought she couldn’t do. In eighth grade, Jannie’s teacher told her she’d never graduate from high school, but Emma knew her daughter was capable of more. Before and after Jannie graduated from high school, Emma was a constant source of encouragement. Roger, Jannie’s older brother, said, “Our mom and dad loved and cared for Jannie unconditionally. Mom always told and showed Jannie that she was worthwhile, that she had potential.”

One of Jannie’s favorite childhood memories was going to church camp. Because Emma taught her to chase her dreams and be independent, years later Jannie also went on a solo trip to Europe through a tour company with trips for disabled people.

Eventually, Jannie went on to work at her mother’s company. You may have heard of it: Edina Realty. Inspired by Jannie, Emma started Edina Realty, fourth largest residential real estate company in America, in 1955 with a team of three people, plus Roger working as janitor. As a bookkeeper, Jannie was an integral part of the business because agents relied on her to get the latest information. Even when Edina Realty grew, Emma wasn’t distracted from what mattered most to her. “No matter how successful she became, she never forgot her farming roots,” Jannie said. “She never forgot where she came from, and she never forgot us.”

After living on her own for many years, Jannie has lived at Walker Methodist Care Suites of Edina since 2018. “This is the happiest I’ve ever been,” said Jannie. “I’m truly blessed to be here. The whole world is off my shoulders now.” Jannie’s planning for her 80th birthday. She wants to serve hors d’oeuvres, cake, and ice cream—and the entire Care Suites community will be invited. Jannie has a lot to celebrate, both on her birthday and every day. She’s done more than overcome challenges; she’s reached her goals and beyond, in large part because of her mother’s consistent empowerment. “She taught me to never give up. Because of her, I kept going,” Jannie shared. “My mom taught me life is full of blessings. Sometimes you just have to look for them.”