Roger is back on his feet: Parkinson’s treatment through exercise

Roger and his wife, Cheri, moved from Arizona to a Walker Methodist community for a specific reason: Parkinson’s care. “We moved here because of the strong partnership with Struthers Parkinson’s Network,” said Cheri. “When we moved, he was in rough shape. Struthers has given Roger the best treatment he’s had since he was diagnosed in 2000.” Two days after moving in, they visited the fitness center to see how exercise could improve Roger’s wellbeing.

Janelle, the fitness technician and Parkinson’s Champion, introduced Roger to the HUR Senso Balance Trainer. Technically, the machine is described as “a scientifically based dual-tasking fall reduction and cognitive training platform designed to support independence” ––but others describe it as “Dance Dance Revolution for older adults.” The machine has 15 interactive games, all totally customizable based on goals and abilities.

Roger uses the balance trainer to step on targets, prompting his brain to work in unpredictable ways. It keeps him on his toes––literally. At first, the targets only moved forward, but Roger thought having targets come from other directions might help him improve his focus. “Distractions are part of life,” he said. “When I started, having targets come from two directions was overwhelming, but it’s gotten easier.” 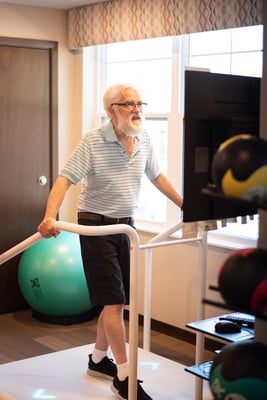 Improving his balance and ability to step forward helps Roger reduce his risk of falling, a significant consideration for many people with Parkinson’s. “My balance has improved since I started using the balance machine. I don’t want to fall backwards, and this has helped me,” he explained. “I appreciate the flexibility of this program. I haven’t missed any sessions, but I know I can if I’m having a bad day. I’m not forced to do anything, but I am encouraged to get outside of my comfort zone. I’m doing things I want to do—for myself.”

Roger uses the balance machine every Monday, Wednesday, and Friday. With education from Struthers, Janelle creates personal plans for Roger based on his goals. He also works with Janelle to try other machines, and they adjust his program as needed. “Even on hard days, Roger is willing to put in the work whenever he comes to the fitness center,” Janelle said. “As his balance improves, so does his quality of movement. We’re working on things that are important to him.”

And for Cheri, this means the world. “The exercise he gets with Janelle—the improvement we’ve seen—is remarkable. Janelle is top-notch. She’s always caring and motivating. I can’t say enough about how she and the team work with us. Through exercise and Struthers therapies, he’s really improved. He’s gotten back on his feet.”