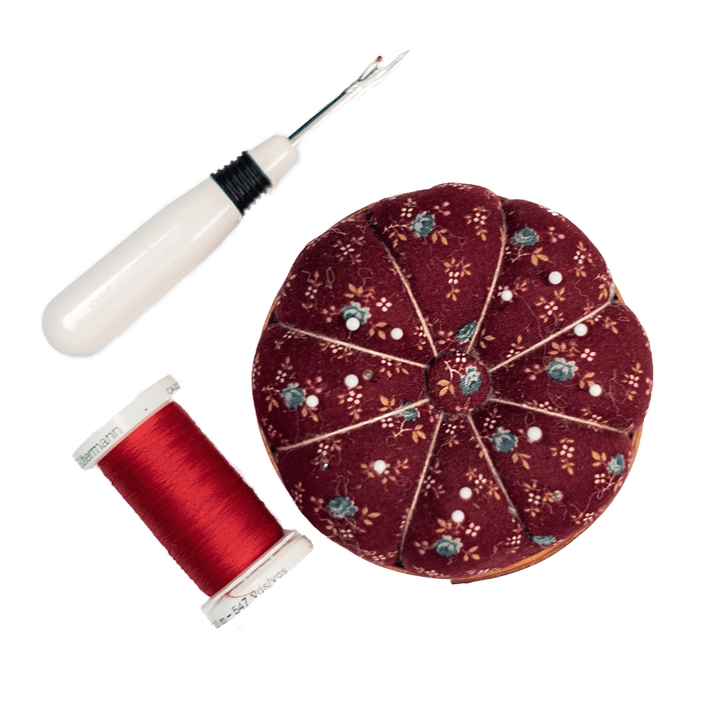 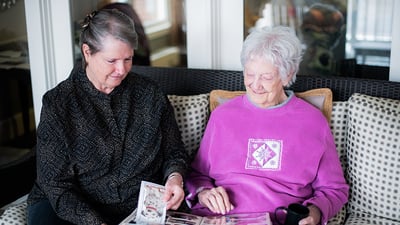 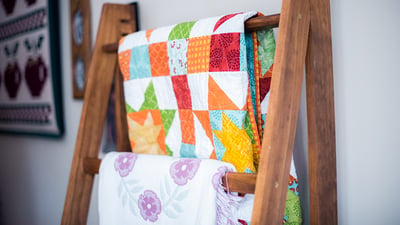 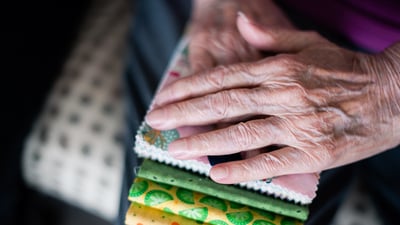 Edina Care Suites is a community for dedicated memory care. It’s a quiet, beautiful building with a welcoming entryway and sweeping foyer with a gorgeous fireplace and staircase. It’s impossible to not feel the warmth and home-like feeling when you enter the space. I just love visiting this particular location and spending time with residents and staff.

The bright, welcoming feel was unmistakable for Kim Mangan as she drove down York Avenue one day in 2017 and saw the community sign out front. She had been in another part of Edina touring a different memory care facility and had left that property feeling discouraged she’d never find the right place for her mom, Dimple. She took the Care Suites sign literally as well as figuratively and pulled into the parking lot. She thought the building looked nice from the outside and decided an impromptu tour wouldn’t hurt anything.

As I walked in the front door, it was like, this is home for her.

This is bright, this is beautiful!

I should get a tour of the rooms and see if it would be something, and see if they had availability for her. 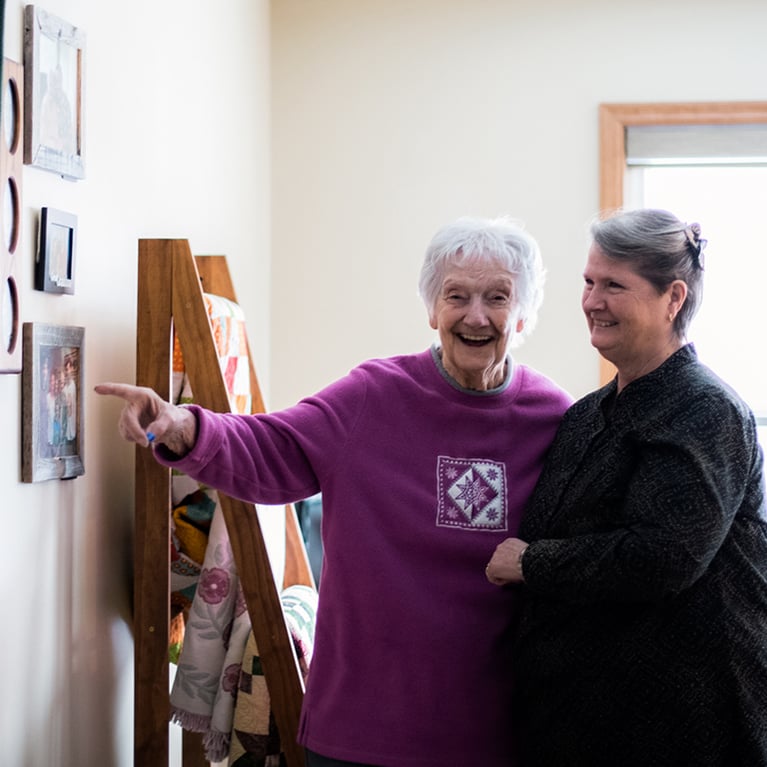 Where There is Light

Kim, her husband Mark, and her sister Cheryl first discovered Dimple’s memory difficulty in 2012. She said, “We started noticing that mom was having trouble remembering things and having confusion. I took early retirement so I could stay home and take care of her. It worked just fine until 2016 when we left on an extended trip and left her alone and ended up having my girlfriend's daughter take care of her the whole time we were gone.

When we got back, we decided we needed to find someplace that would be able to care for her better than we could. My sister and I discussed this extensively. We went to see doctors. We went to see all the experts in regards to what's going on. She was diagnosed in early 2017 with Alzheimer's disease, and that's when I started looking for places to possibly care for mom because my husband and I were having difficulty keeping up with her.”

Kim continued, “She was constantly getting up in the middle of the night and packing things. She was trying to go outside without our assistance. We put locks on doors. She's smart. She figured out how to open the locks. When I started looking for [memory care] places, the biggest problem I had was finding a place that wasn't dark and dreary and very sad to go into. I was having a very, very difficult time finding a place that was bright and sunny. Every place I looked at was dark, dreary, very tight quarters. And they were just not the places that I want Mom to go to. I needed someplace that she would feel happy in.”

Kim met with Care Suites’s Executive Director Amanda Pitsenbarger and Sue Stenberg, Director of Sales and Marketing. “Sue gave me the tour and the room was beautiful. It was bright, sunny, had big windows, and it was private. She would not be sharing a room with someone which was important to us. And so I came down and again talked to Amanda and they indicated that they might have a room and that they would let me know if something came up. And so I left and waited for Amanda's phone call, which came.”

I Needed Someplace Where I Would Feel Happy

Kim continued, “So, we tried to be as gentle with her as we could. Finally, the day came to move in and we got her up real early in the morning and didn't tell her where we were going. We drove over here and she was not going to get out of that car, no way. She was not going to go in that "dump" even though she'd never even seen the place. After about 20 minutes of talking to her, I finally convinced her to come in and we walked in the front door and she kind of looked around and softened a little, as if to say, well, maybe this isn’t so bad, but she was holding my hand really tight and Kim at the front desk, one amazing lady, comes to greet us and says, "Dimple we're so glad that you're here. We want you to feel at home. Come on in and sit down. How are you feeling?" And Mom said, "I'm scared." And she's, "Oh, there's nothing to be scared of. Would you like a cup of coffee?" Well, mom's cup of coffee is like ambrosia to the gods. She loves coffee.”

She added, “So, Mom sat down, Kim brought her a cup of coffee, and then all of a sudden there was Jack [Pickar], the Director of Life Enrichment, and Teresa [Kocher] the Director of Resident Services. Everybody was around her, doing things with her, talking to her, calming her down. We took her up to her room and watching her, it was like, wow, this is going to be okay. The nurse came over to me and says, "Why don't you go and we'll take care of her from here." And I left trying not to feel guilty, trying not to cry, trying not to be too emotional about it.”

The Muscle of Memory

Alzheimer’s disease is a form of dementia that affects thinking, behavior, and memory. Symptoms appear slowly and gradually worsen over time. It’s a progressive disease with no known cure yet and affects an estimated 5.5 million people in the U.S. For such a widespread affliction, caring for a loved one with Alzheimer’s can be very isolating and stressful. Kim shared similar feelings with me when we talked about her mom. How hard it was to make the decision to transition to Care Suites and entrust her care to others.

Kim said, “Since the very first day she moved in, things have been incredible with her. She enjoys joining in on everything. She enjoys the people she meets. She has friends now. She loves the food. She's getting her medication correctly, which I found out I was not administering right. That was so stressful. She's been here for two and a half years and I couldn't be happier with her care she’s been receiving. Mom’s been so much calmer, so much more my mom than she's been in years. And she no longer tells me that she hates me for bringing her here. So my guilt is completely gone. She has been so, so happy.”

One visit to Dimple’s room and you’ll see an anthology of craft and beloved hobbies. Gorgeous tapestries of handmade quilts adorn her bed, backs of furniture, and even her walls. The collection is breathtaking. I ran my hand along the binding on one of Dimple’s quilts, mesmerized at the tiny, perfect detail of the stitching. I ask Dimple if she made this. “Oh yeah,” she says smiling. “I’ve made a bunch.” Kim concurs. “That's the one thing she still asks me to bring her; her sewing machine.”

So my guilt is completely gone.

She has been so, so happy. 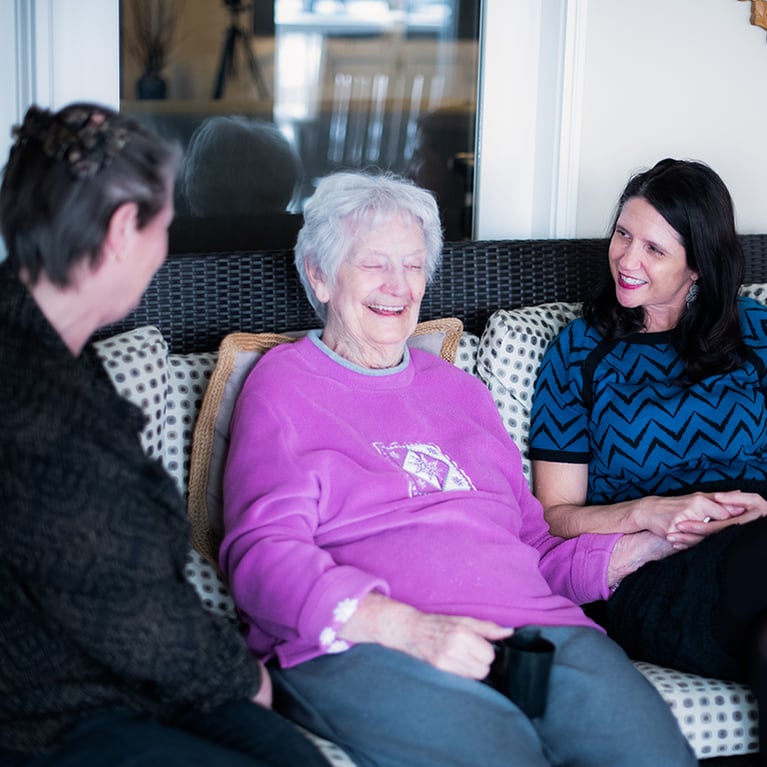 She Remembers She Loves It

“Mom's been quilting for years and years and has loved it for years and years. Back in the 1970s, my sister Cheryl bought Mom a Singer Featherweight sewing machine — which is an old antique sewing machine and she started sewing. And with that Featherweight, my sister taught Mom how to quilt and then Mom taught me how to quilt. And between the two of us, we've finished probably about 150 quilts.

Now when possible I will bring her sewing machine to Walker — I’m not comfortable leaving it for her because there are lots of sharp tools that you use when you quilt. And there are other residents on the floor I need to think about. So, I bring it with me when I can, and Mom and I will sit down and do some small projects so she can say she completed a project. Unfortunately, I have to show her how to put the material through the machine and watch so she doesn't sew her finger, she has to be careful with it. Working together makes it perfect; we try to do it as much as we can. It brings my mom back to me and she loves it. She remembers it. It's something she loves to do and she remembers that she loves it.”

The Signs & Sounds of Happiness

As Alzheimer’s progresses in patients, cognition declines. It can be hard to communicate with people affected by the disease. For families like Dimple’s, knowing she’s safe and well cared for at Walker is one thing, but witnessing her happiness is another, especially if she’s unable to effectively tell her daughters how she feels.

Kim said, “She was whistling the other day, which was her favorite way to wake us up as kids. She'd whistle and come into our bedrooms, just happy and loud like that. And, she's a terrible whistler! But it never stopped her. She would whistle us awake every day. She was doing that upstairs the other day as we were going to lunch, so it just makes me certain that she likes it here. There’s absolutely no denying it.”

Kim smiles at the memory, adding, “On a regular basis my husband and I will take her out to breakfast at her favorite restaurant, which is the Original Pancake House. We try to take her out to things like driving to see Christmas lights, those types of things. When I was growing up, one of Mom’s favorite sayings, when we got home, she would say, home again, home again, boopity boop." I don’t know where that came from, or how it started, I just know she always said it. The last time we brought her back home from the Original Pancake House, as we drove in the driveway, she said, home again, home again, boopity boop. And at that point, I knew she was happy being where she is. And that makes me feel happy. Happy that she's happy, happy that she's comfortable, happy that she likes the people she’s surrounded by. I am so happy with this place.” 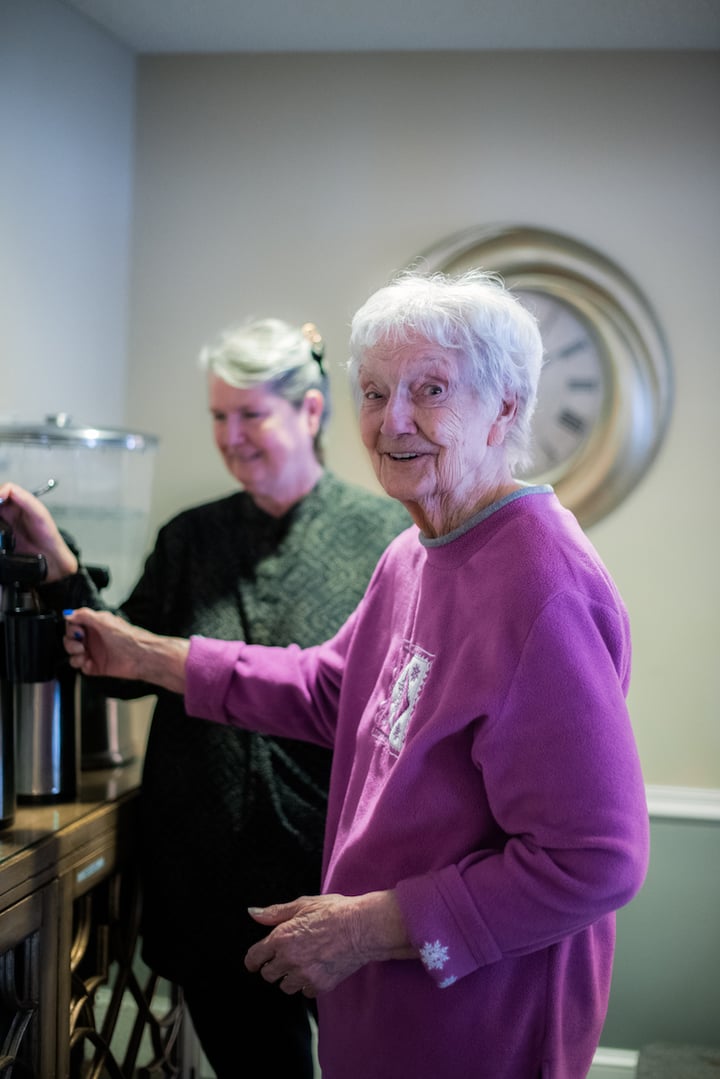 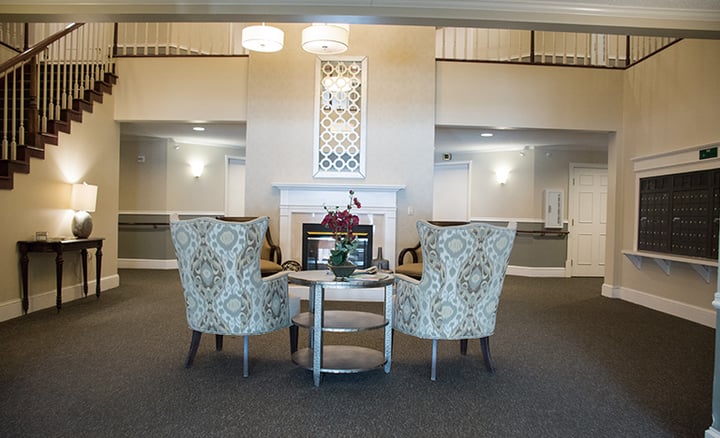